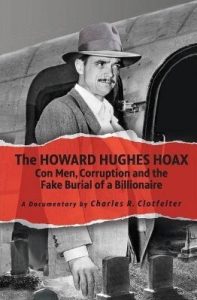 As a follow-up to his earlier work (The Price of Their Souls), The Howard Hughes Hoax shares his extensive research into the conspiracy surrounding Howard Hughes’s life and death. This was a conspiracy to mislead the public and camouflage the truth about Howard Hughes’s death. In this book, Mr. Clotfelter unfurls a treasure trove of background material which makes his analysis and conclusions both thought provoking and compelling.

The author’s life became entwined with that of Howard Hughes’ in 1964, on a remote road in Southern Mexico when Howard, then a stranger, committed a random act of kindness that may have saved the author’s life. The author and Howard became friends in their two-day journey north to a more populated area, where the author could board a train. In their many discussions, Howard confided in the author that he had only eight months to live.

Later in life and through extensive research, the author realized that his long-ago benefactor had been none other than the reclusive billionaire, Howard Hughes – not the reclusive, demented persona fabricated by those bent on pillaging the Hughes estate for millions in ill-gotten gain. The Price of Their Souls is a vindication of Howard Hughes, shedding light on the greatest scam of the 20th century. No conspiracy theory written can compare with this intriguing documentary.

“I do not profess to be expert in all the medical arts. However, in consideration of my knowledge of endocrinology (toxicology), it appears to me that the lab-tests, evident in Mr. Clotfelter’s book “The Howard Hughes Hoax,” are not indicative of renal failure being the sole cause of death of the corpse, believed to be “Howard Hughes,” autopsied at the Methodist Hospital, Houston, Texas, in 1976.

Furthermore, it was apparent to me, as it would be to most in the medical arts, that the destruction of the ribcage, breastplate, clavicle, and spinal bone tissues (as described in numerous news articles concerning Howard Hughes and his 1946 XF-11 test plane crash into Beverly Hills, Calif.) could not have healed to the extent of being non-evidential in the Methodist Hospital “HH” corpse autopsied 30 years later.”

“The thesis begins too fantastic to be true. The implausible begins to appear possible, then even probable. An impressive compilation of supporting exhibits makes a compelling case.”

“As a follow-up to his earlier work (The Price of Their Souls), Mr. Clotfelter’s exquisitely researched work (The Howard Hughes Hoax) captures the essence of conspiracy to mislead the public and camouflage the truth about Howard Hughes’s death. In doing so, Mr. Clotfelter unfurls a treasure trove of background material which makes his analysis and conclusions both thought provoking and compelling.”

“As far as insights into the medical side of Mr. Hughes’s life, I have one major remark. Pathological evidence of identity usually would have to pertain to the skeletal system. His collarbone fracture, regardless of surgery or close reduced, would leave evidence. If an ex-ray of the remains depicted a healed or unhealed fracture, identity could be confirmed. If the collarbone appears anatomic (without irregularity), more cause for DNA testing could be argued.”