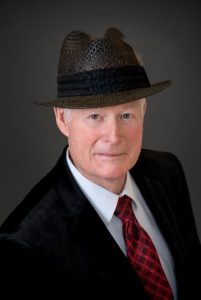 Charles R. Clotfelter was born into a military family and traveled frequently in his younger years, including Naval bases from Bremerton, WA to San Diego, CA and Albuquerque, NM to Yorktown, VA. Finally Charles and his brother were placed in the Augusta Military Academy in Fort Defiance, VA when his father received orders to ship out.

After graduation, wanderlust became a way of life for Charles, including California, Utah, Florida, the Bahamas, Mexico, Oklahoma, New York, and Hawaii.

It was in the small town of Ciudad Hidalgo, Mexico, bordering Guatemala, where Charles met Howard Hughes, and the seeds were planted for the documentary book, The Howard Hughes Hoax: Con Men, Corruption and the Fake Burial of a Billionaire.

Now, almost 60 years later, Charles Clotfelter has uncovered evidence to support his assertion that Howard Hughes died in 1965, eleven years before his alleged death in 1976, and that an elaborate and illegal con was perpetrated by those in the Howard Hughes Industries inner circle.